The aim of this study was to evaluate a dietary supplement Lady Prelox®for climacteric symptoms and sexual function in peri-menopausal women in double-blind, placebo-controlled fashion.

In placebo-treated women the total FSFI score non-significantly increased from baseline 12.4 ± 2.3 to 14.4 ± 2.8 after four weeks and 16.6 ± 2.3 after eight weeks. In the Lady Prelox® group the FSFI score at baseline was moderately higher than in the placebo group (16.5 ± 2.9) and increased to 21.7 ± 2.8 and 26.5 ± 3.3 after four and eight weeks, respectively. The scores for Lady Prelox® after four and eight weeks of treatment were statistically significantly higher than in the placebo group. A detailed examination of the different domains of the FSFI suggests that Lady Prelox® significantly improves all “desire”, “arousal”, “lubrication”, “orgasm”, “satisfaction” and “pain”. Comparatively, the domains “orgasm” and “satisfaction” were found to improve most prominently. 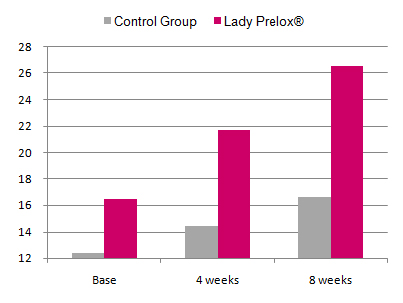 Climacteric symptoms were found to significantly improve with Lady Prelox®, after four and eight weeks of treatment. A series of symptoms was found to improve significantly already after four weeks as compared to the group of women taking placebo: hot flashes, night sweats, sleep problems, irritability, depressed mood and mental focus. These improvements were maintained until completion of the trial after eight weeks. All symptoms except “depressions” of the “Women Health Questionnaire” were significantly less pronounced than in the placebo group. Symptoms responding particularly well to Lady Prelox® were related to cognition (mental focus) and “anxiety/fears”. Interestingly, the symptom most influenced by the administration of placebo, was the self-perceived attraction. Safety evaluations suggest that Lady Prelox® and placebo were well tolerated and none of the subjects experienced side-effects. Blood laboratory testing confirms the safety of the product. A small yet statistical significant lowering of systolic and diastolic blood pressure was noticed with Lady Prelox® after eight weeks. Blood pressure, BMI, lipid profile and TAC significantly improved in the group receiving Lady Prelox®.

This study points to very promising general improvement of well-being for women during the difficult transitional menopausal period. The simultaneous improvement of both sexual as well as climacteric symptoms warrants further investigation also for identification of long term benefits.